For years I've thought the design of the 5-cent Jamestown (Scott #330), very interesting for its Pocahontas picture. In her stamp portrait she surely doesn't look like an American Indian, dressed as she is in an English costume from the era of the first Queen Elizabeth, complete with a hat. The use of this image by the stamp designer is simple to explain. It the only picture of her in existence. It is a portrait painted of her in England after she married Jamestown colonist John Rolfe, and accompanied him back to England.

When issued in 1907, this 5-cent stamp would pay the lightest foreign letter rate. So, the usual covers bearing it in single use went abroad. It now is very scarce as a single stamp on a cover postmarked in its issuance year of 1907.

For a long time I've followed the quest to obtain specimens of this stamp on cover, in either foreign or domestic use, the chief desire being to acquire it with unusual cancels. In gathering cover specimens I've noticed that a small number bear flag cancels, but through all the years I've searched covers, never, until now, have I succeeded in finding one cancelled with a Doremus cancel. 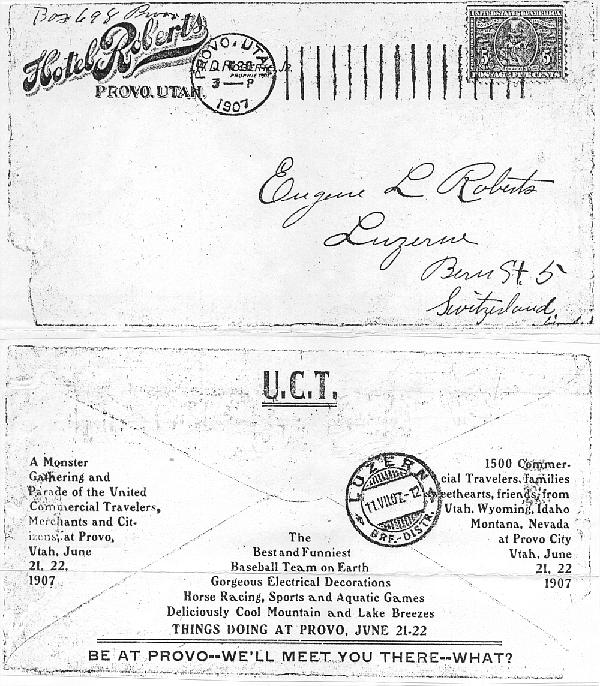 This newly acquired cover was found at a local stamp show. Mailed in June 1907, in a small Western town, it is addressed to the little country of Switzerland, and it has a Swiss receipt postmark. Also, it has a hotel corner-card on its front, and its reverse has an all-over ad promoting a big local celebration held in Provo, Utah, this same month of June 1907.

I was happy to add this multi-featured cover to my collection of Pocahontas stamps on cover.

Webpage design by The Swanson Group