Those older readers who can remember the years of the 1930's, the 1920's, or earlier, will recognize instantly the name of Zane Grey. He lived from 1875 to 1939, and during the first third of the 20th Century he was the best-loved and most prolific writer of fictional adventures and romantic novels, always with the settings in the American West. Millions of un-travelled people, as well as those who had seen the West, doted on his stories. He was doubtless the best known writer to ever come out of the State of Ohio. 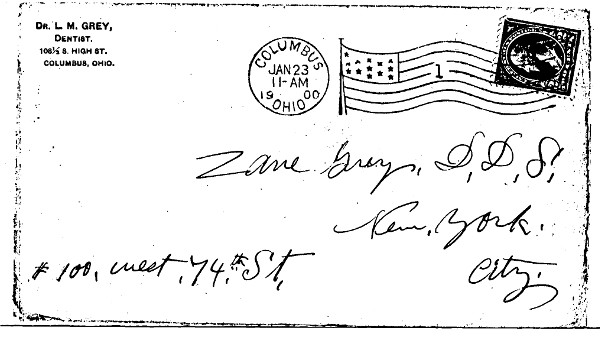 He was born in Zanesville, and was named after the town's founder by his father, a dentist. His father was so demanding that the son follow in his father's profession that young Zane Grey unwillingly attended dental school, and then went to New York City to establish himself in this profession. But, after a few years practicing dentistry, with his thoughts ever on the seeming romantic outdoor life of the far West, he abandoned the dental profession, abandoned New York, and took up an impoverished life style in a lonely area near Hawley, Pennsylvania. There he enjoyed the woods and hills, and he taught himself to write.

But failure only was his fate for several years in his attempts to get any book publisher to print and issue any one of the several Western novels he had composed in his Pennsylvania retreat. Finally, one publisher agreed to issue one of his books, and, "it went over with a bang." The public clamored for many more such stories, and Zane Grey obliged with dozens more of Western story books, producing them for the rest of his life.

He had himself immensely rich in the process, as they sold by the millions. Of course, he soon ceased to reside in the East, and took up residence out West. In his later years he lived in a mansion in Pasadena, California, which was built in the style of an Indian pueblo. He has also had a vacation mansion in Avalon, on Catalina Island.

At a local Pasadena stamp show, I picked up this cover, which obviously originally contained a letter written to Zane Grey by his father. I see he proudly titled his son with the huge written "D.D.S." (Doctor of Dental Science), the old-fashioned title dentists were addressed by.

This cover bears a fine impression of the 1900 Columbus, Ohio, Flag Cancel, dated on its second day of known use. I feel that the flag-cancelled covers addressed to, or sent by, well-known or famous people of the past, add much interest to my Flag Cancel collection, and I am happy to have found this gem.

Webpage design by The Swanson Group